Whip up this blueberry kale protein smoothie for a healthy breakfast or tasty snack. The blueberries make it purple instead of green, making it kid-friendly, too. Also, be sure to check out our list of cooking recipes for kids.

This blueberry kale smoothie is filled with creamy frozen blueberries, baby kale, and sweet banana. Filled with protein from creamy Greek yogurt and vanilla protein powder, making it the perfect breakfast smoothie to start your day off right.

I have been back on the exercise and healthy eating bandwagon now that I’ve come out of the newborn haze and this smoothie has helped me more like myself. It’s an easy and healthy breakfast I can whip up for myself quickly. Which is important because I have been guilty of not feeding myself lately.

The protein powder used in the blueberry kale protein smoothie

Is it OK to put raw kale in a smoothie?

Yes. Kale is a common ingredient in many green smoothie recipes and is a great source of vitamins K, A, and C.

If you haven’t had a green smoothie with kale before, this is the perfect kale smoothie for you (and your kids). You can’t taste the kale and it stays purple – thanks to the blueberries. My kids follow me around like I haven’t fed them in a week each morning until I share this blueberry kale protein smoothie with them. It’s that good.

Can you blend kale?

Yes, but you may need to blend it twice. Kale is relatively sturdy and does take some time to break down. Even with a lower-end blender, you can blend kale. Just blend it twice, if needed. 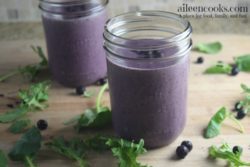 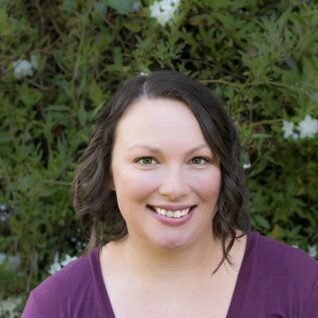